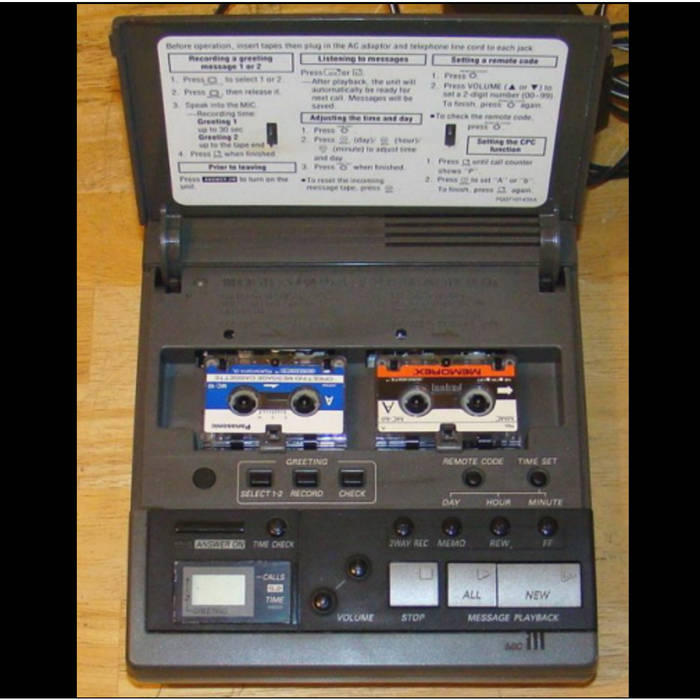 The Automatic Confessional was a project created and curated by Hal McGee from August 19, 2009 through March 2, 2010. Anyone and everyone was invited to leave a one minute message of any sounds, content or sort on Hal McGee's microcassette answering machine.

Participants were invited to:
Call the Automatic Confessional answering machine at 352-336-7915 and leave a one minute message of any words, thoughts, sounds, and noises. Anybody and everybody can participate!

(Please note that the telephone number is no longer in service)

Here is the original project description and project guidelines:

You are invited to telephone my microcassette answering machine and leave a message of one minute in length. Your message can be as short as you like - only a few seconds in length if you wish.

Absolutely anybody and everybody can participate.

Your telephone will connect with the machine after a few seconds (you will probably hear two rings before it connects). Then you will hear a short spoken pre-recorded message from me, and will be instructed to leave your message after a long beep sound.

At one minute you will hear a beep sound which indicates that the machine has stopped recording.

This is not my personal telephone number, and it is being used solely for the Automatic Confessional project.

You are allowed to leave a message of any sort, of any sounds, or words, or thoughts that you choose, with absolutely no restrictions on content.

State your name in the message if you want people to know who it is and want to be credited for the message.

You may leave a message anonymously.

You can leave as many messages as you want and there are no restrictions on how often you leave a message, but try to show restraint and do not overdo it. The idea is to get as many different people involved as possible.

I will not edit or restrict or censor the messages in any way. I want you to understand the full implications of what this means. I will allow any form of expression, no matter how offensive, objectionable, or tasteless -- this includes hate speech, racism, sexism, ageism, etc. This does not mean that I personally condone or approve of or agree with any content of any of the messages.

The answering machine tapes will be published online and will be available to the public. You are entirely responsible for the content of your messages. Think twice before you leave a message which may be personally embarrassing or compromising to you or someone else or which is slanderous, libelous, inflammatory, or hateful. Once I publish the tapes on the Internet the sounds you make in your message will be able to be heard by anyone forever. I will not remove your message from the tape - do not ask me to do so. You have been warned. Any regrets will be yours -- not mine.

I can see this as an ongoing project that will evolve and change over time. Automatic Confessional will operate with the same lo-fi conceptual and fluxus spirit as my Dictaphonia Microcassette Compilation Project but will be more open-ended and free form.

I am looking for a lot of variety in the messages, style-, content-, and mood-wise, a big grab bag audio trash heap collage.

Here are some keywords, suggestions, possibilities and random thoughts about what you could contribute:

This project is in no way connected or affiliated with the Catholic Church or any other religious or political institution, such as the Masons or the U.S. government.

The Automatic Confessional project started at 12:00 PM on Wednesday, August 19, 2009

Bandcamp Daily  your guide to the world of Bandcamp

Guest hosted by Tamar Osbourn aka Collocutor and Toshio Matsuura.